I originally had plans for an imperial stout with brettanomyces much like The Mad Fermentationist Courage Imperial Stout, which historically, had brettanomyces involved in the fermentation, probably from the barrels. Either way, check out  this Post.

So, I had the inclination to brew a big Imperial Stout, but I wanted to use brettanomyces. Bingo! I had harvested some WLP670 recently, from a batch of Hoppy Farmhouse Ale I've appropriately named Lemon-Face, due to the Sorachi Ace Hops. So I figured why not, and scoured the internet, looking for anyone or anything who'd done it before, when I came across Jester King Black Metal.

The Jester King beer is considered a Farmhouse Imperial Stout. It looks like they use some brettanomyces as well, this can also be funked up to crate Funk Metal.

so anyways, I had found my inspiration, I had some harvested yeast, and some malt I had ordered previously. What the Heck Right?!

From what else I had read, the Saison yeast, would be somewhat lost behind rich aromas of an Imperial stout, but there would be some funk and phenols around it, to essentially round it out. With the added brettanomyces already inside WLP670, some additional funk should come about of a period of time.

So without further delay - a Recipe: 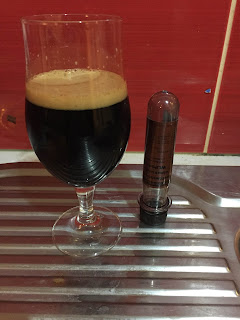 7 Feb 2016 - Brewed on the Grainfather. Mashed in with 24 litres of water, and sparged with 6 litres of water. Missed the amber malt in the recipe, as it had been bagged separately. Removed 1-1.5 litres of mash water (the mash had been removsed and sparging had begun) and stirred in the amber malt for a 15 min mini mash. poured back to the Grainfather through a sieve. No other salts added to mash  or boil.

7 April 2016 - Small Taste from Primary.  no hot alcohol at this stage, some yeast character, and plenty of thick malty stout type character. No presence of Brett noted.

Appearance - Black as night, with beige/brown head. Carbonation, is nic and low, perfect for style. some lacing despite, being higher in alcohol

Flavour - Funky Farmhouse notes, but restrained. Booze is prevalent, but hopefully should dissipate with time.  Some small amount of tartness as well to round it off.

Mouthfeel - Good mouthfeel, the lower carbonation, works well with thestyle, and keeps the booziness in check. Probably a tad thin, but that'll be the low FG.

Overall - Overall a nice beer, and should only improve over time, I'll post more notes another time, but I'm impressed, it does work as a style, just be sure to keep the esters and phenols in check.
Next time, Id mash higher maybe 69Deg C, and probably, add some extra crystal malts.
Posted by CRUSADER1612 at 00:34