This "NEW" style is all the rage in the US, and it's starting to creep in over here in New Zealand. From Garage Projects Part & Bullshit to The New Deep Creek New England IPA, there is a range of this style emerging into the craft beer scene, so given I've made a couple of these (I haven't posted about all of them) I figured it was time to test out a new yeast.

The most common yeast in the style appear to be the Conan yeast and WY1318. Low Flocculating british style ale yeasts, with some fruit driven ester formation.  The beers tend to be Hazy (some even Murky) It seems to be a combination of low flocculation of yeast, flaked oats, hop bio-transformation and general amount of hops thrown at it from a distance.

But what about Dry Yeast? We all know S-04 is one that is used in the style, sometimes to good effect. But outside of that, people tend to use or stick with the tried and true WY1318 or Conan type yeasts. (we're talking about clean beer, rather Trois here)

Anyway - Living in New Zealand has its own set of challenges; 1 of which is the cost of and availability (at times) of liquid yeasts, specifically conan (only the local shop here gets it in, and that not a steady stock stream.) So I wondered about using one of the Mangrove Jacks Craft Series Yeasts for this, and came up with M36 Liberty Bell. formerly known as M79 burton Union, it exhibits fruit ester formation and is considered a good yeast for hoppy british beers.
Great; but just one problem..... It tends to flocculate relatively well in British Stock Ales. but hey why the hell not, right?

So I brewed it up, and you'll see the rest below. Fun Times are back in full swing with a brand new knee. 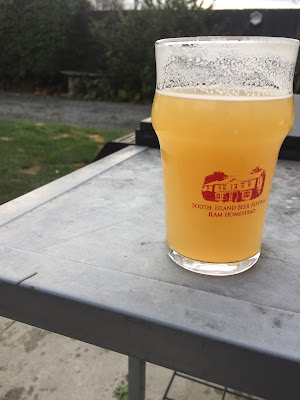 18 June 2017: First Taste - Lovely beer, no off flavors, hops are a little muted with a the yeast character more prominent than I'd like.

Appearance: Golden Straw - Hazy as expected. Force carbed has done a good job, with nice lacing and slightly low carbonation. but good so far. Should improve. At least its not murky, like some of these I see.

Aroma: Fruity Hops, resin from columbus, but citra/galaxy and mosaic takes over. some yeast character too. not too sure on this. Needs more hops. Something I noticed at the CHBA meet over the weekend, (DIY Dog Brewcomp) was that massive dryhops can actually work, I always thought that that amount of hop saturation would make a beer come out grazzy, but it doesn't seem to be the case. so I probably under-did the dryhop based on what the forums are talking

Flavour: Similar, Hops are a little underwhelming, should be packed with flavour, there is a distinct yeast character, pear ester type thing from the yeast that detracts from teh beer. It's a nice tasting beer, and I get plenty of hop flavour, it just hides a little bit of it. Bitterness is spot on, its present, but not tongue stripping. more APA bittering, which is what the style asks for.

Mouthfeel: Nice coating beer, thick and creamy as it should be. malt flavor is there. Needs more hops.

Overall: Very good beer, I'm impressed with this, I think if you use this yeast, you have to add more dryhops, as the yeast takes away from of the impact. I think S-04 as a dry yeast is probably more appropriate for the style, but at a push its definitely a good yeast to use.
Columbus is a good choice in the boil, gives the hop character as extra note, that I really enjoy.
Change for next time? more hops, especially if I leave the yeast strain alone. I attenuated well and fermented brilliantly. Even had a blow out at day 3.

THE YEAST: I think it can work in beers like this, but you've got to work harder to hide the yeast character. It would definitely work well, in Stouts/Porters and other English style beers. Might have to give it a crack next time I brew up my favourite Brown Ale.