Howdy everyone.
Sunday was a brew day for me, and it was a good one, couldn't have gone any better.
I hit all my numbers; Pre boil O.G, Mash temps and Even got an additional 1 litre out of it for my troubles.
Had a great time doing it too, Got up bright and early at 6:30am and was finished by 11:30-12, 20 hours after pitching the Mangrove Jacks M.44 West Coat yeast its beginning to bubble and has a small ring of krausen forming.

The brew is a Porter, Loosely based on Jamil's Robust Porter. With some minor changes.
As per my last Post, it has been dubbed The Sons of Liberty Porter. As its a mix of an English style beer, with american Hops and yeast. Th hop schedule, is more to the English style of schedule. I'm hoping for a good solid porter, with a little hop kick from the Beautiful Amarillo Hops used.

Now for a small Plug for my brew mate Paul Finney, who has just opened a Home brew-shop. Sourcing Local ingredients from Gladfields, along with Liquid yeast and Imported and Local Hops.
Its in Bishopdale Mall, and is called Finney's Homebrew Emporium.

Secondly, Bottled the Zombie King IPA with Alan yesterday afternoon. This is an amazing beer already, and although its pretty hazy, it's going to taste damn awesome. The aroma was like Fresh Fruit, which for some would be too much. But not for me the big hop head I am.

Now, I have concerns about my BIAB techniques:
#1 is Beer Clarity - The Zombie King is pretty cloudy, This is Hop Haze, but it almost seemed like there was something else too it, a protein of some sort floating around...
Could be chill Haze, from a poor cold break? For those who read this: Is this something that happens when Inputting Flame-out hops and leaving for 10-20 mins to lock in that aroma?
I reckon its something also to do with the BIAB technique. As there is no Grain Bed to filter and Vorlauf the Wort accordingly. Something to think about.

and #2 is Trub - The Porter has a pretty solid amount of Trub even though I whirl-pooled (sort of) and let things settle out as well. This is a BIAB issue I'm pretty sure, I also used a Sieve to get rid of some of this stuff. which should eliminate some of this. this is based on the visual I had this morning when I checked it. It may settle out, so watch this space to see what happens.
I may have to secondary this one, as its my first beer for NHC2013.
Leave comments below regarding the possible solutions using the BIAB techniques on clarity and Trub in the fermenter, would be very interesting to see what others do.
:-) 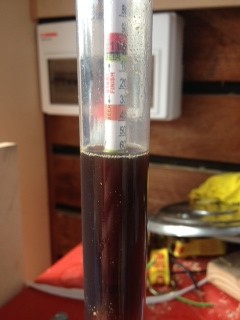 Welcome Back to Brewing!!

After a Much needed Holiday I was actually able to brew a beer.
It felt pretty damn good to brew. with the help my a mate. Al was really helpful, and has a bit of an interest in brewing himself. We are splittingthe beer in half after bottling.
Heres the recipe on brew toad: Its a variation on the Three Floyd IPA available on Homebrewtalk.com.
ZOMBIE KING IPA

I hit 1.064 on Post Boil, which is 1 Point away from where I was hoping to be. and Hit Volume perfectly, after saving some wort from the 3 odd litres of trub after putting in the fridge for a few hours. It something Jo from Liberty has done in the past as well.

Fingers crossed it turns out, due to the issues (probably my own fault) with the S-04. It was going like a machine gun, and I've been away with work for a couple of days and ramped up to 21 now. hoping for 1.016 FG.I'll ramp to 22 in another couple of days to make sure its finished, and dry hop on Monday night... After an FG check of course. :)

With the NHC only 2-3 months away, its time to ramp up the brewing again, got 4 planned for the NHC 2013, a Porter, Blonde ale, American Amber and American Pale ale.
1st is the Porter Dubbed "Sons of Liberty". The reason I've called it is this:
The Sons of Liberty were and organisation of American Patriots, who originated i nthe Pre-Independence North American British Colonies. they were formed to Protect the rights of Colonists and take the streets against the abuses of the British Government. Where as the English Porter brewed in the 18th Century. It is a well hopped Dark beer.
So I kinda figured that the two would be good together... American Porter is the Style, using a British Porter recipe, and American hops and yeast, not heavily late hopped, more of an english hop schedule.
I'm excited.
Posted by CRUSADER1612 at 00:37 No comments: