Right so, I was writing this on the homebrewtalk.com forum, and figured a nice post on hops and making a good IPA is in order. I'll post some references as well to back up my so called theories.

Right so, as brewers (I assume all of you who read this are brewing to some extent) enjoy a good hop-bomb every now and then, some more than others. I'm certainly no expert when it comes to big Hoppy beers, hell I've had some pretty dire ones (Dragon IPA was one of them, not so much a hop issues though).
First some reference guides to what I have been looking through for awhile:

Mr Malty - The Secret to big Hop Aroma and Flavour

Fresher Hops - Here in NZ we have an abundance of fresh citrussy zesty hops. Fresh Vacuum sealed hops are key. Seal them, and put them in the freezer if you don't seal properly, frozen hops will last longer.

Experiment - Sure they might not all work out, but there are so many unique varieties outthere, especially in this country, so why not have a go, at least you'll knowwhat character it brings to the table. I haven't really done any SMaSH beers, but a few single hop beers here and there have given me an idea of what each of these hops bring to the table.

Late Hopping - Go big or go Home, no recipe is un-flawed as its all personal tastes, so the way I am beginning to brew hoppier beers is with big late additions, not necessarily for flavour additions, but big flameouts. for example Dark Storm 10min - 30g, Flameout - 60g. this is twice the amount of the Flavour addition. you'll get some bitterness from it, but it is minimal compared to the 60min bittering addition.

Dry-Hopping - My Thoughts on Dry-hopping, in particular for IPA's is go big or go home. Dark Storm had 80grams of Mosaic in there. It'll suck up some of your precious beer, but your flavour contribution and aroma will be better off for it. Aroma of something is one of the foremost component of tasting anything, so the how it smells is very important.

Keep it Simple - Keep your Malt bill simple, lots of small additions of thing will only make your beer muddled, and it won't mesh as well as it could do.

Caramel/Crystal Flavours - This is an interesting one, theres not really a correct way to do it, due to personal preference, but if you want a Dry IPA with plenty of hop punch, keep your Crystals Low (This is inline with style generally), if you like it Maltier and slightly sweeter, yo can add a little more, or add in another colouring of crystal.

So going back slightly, I was looking at some of the Stone Clone Recipes online, namely the Ruination IPA, it is suggested this is very close to the real thing, some even calling it cloned. But a beer being "Cloned" is all subjective, you look at a recipe that says it tastes like ruination, it has the same ingredients as ruination, but are the hop timings correct? Is the malt bill too dry? too Sweet? there's no real right answer here, as its all personal preference and individual taste.

But here is what I noted about this recipe in particular:
The bittering is high which makes sense, but the lack of big additions at flameout makes me wonder, and theres no mention of people making larger additions at flameout.My thoughts are as follows, and this falls in line with stuff I've read suggesting, big late hop additions for aroma/flavour at flameout, which should in theory be increased from those additions made around the 10 min mark. I saw this recipe and it seems to fit with my flameout addition theories. http://beerandwinejournal.com/stone-...hop-ruination/
Now theres a 1.5oz centennial at flamout with an additional 0.5oz of chinook.

The second part of this, is that another increase in hops should be used for dryhopping, to get the other flavours to pop and the aroma to jump out of the glass at you. so my suggestions if going 100% Centennial would be 3-3.5oz of Dryhop.
Again this is just personal taste/preference, but going forward I think it's time I look further i nto the schedules of these types of beers.

Review and tasting time, (It's morning so, I'm not drinking one now.)

The Recipe is based off this: Riggwelter Brown Ale
Here is my recipe: Black Sheep Yorkshire Brown ale 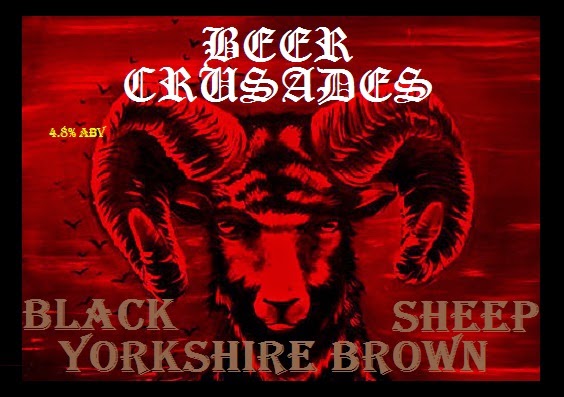 I bottle conditioned the beer, as I didn't have Keg room. I threw the beer into a recent Case swap, and I find in particular the WY1469 yeast so important to the flavour and ester profile.

Appearance: Very Dark Brown Good clarity, The head retention is an issue on this beer despite the Torrified wheat used duringthe mash.
Aroma: Yeast esters and plenty of chocolate, small amount of roasty-ness, which is a nice touch. i did get a couple of over-carbed bottles, due to some remnants of previous yeasts. Same reports from case-swappers

Flavour: Pretty similar to the aroma, Plenty of Chocolatey sweetness, and Yeast esters. the yeast is so important in this beer, as it drives the esters while remaining very clean along the way. Carbonation is fine, bar a few bottles/gushers from bottle infections.

Mouthfeel: Good mouthfeel, medium body, plenty of maltbackground keeping the nice and juicy, i don't find the beer thin at all. Head retention as I said above is an issue, I'm not really sure why its such a problem.

Overall: Very nice beer, Sessionable at 4.9%abv good mouthfeel, need to fix head retention issues, this is the first beer for awhile, where I've had this problem, no lacing, and the head just drops. I'm assuming theres a protein somewhere that is causing it. when I make this again, I'll probably lighten it up slightly, the gladfields chocolate malt is quite dark, Just back off on the choc malt, and possibly add a touch of Dark Crystal, or Shepherds delight, mainly for some caramel sweetness.
I'll keep the torrified wheatat this stage, it seems to add some mouthfeel, and a nice nuttiness to the beer, which adds complexity and nice flavour.

Well, the SJPORR challenge NZ Leg is over, and we have the rating for every beer entered.