I've been struggling with what I should brew recently. With the weddijng over, and a raft of left overs hops to use. I decided to re-visit one of the Wedding recipes..... but which one?

I decided, that as I wasn't a massive fan of the beer (Read: Boring), i decided it was a good idea to re-visit this particular recipe.
The Blonde/Golden Ale, which funnily enough was probably the most popular beer on the day.

But given the word I used above (Boring), I wanted to put a little bit of a spin on  the beer, without going crazy with it.

so I decided to changethe flameout hops, and use a slightly different yeast. See as follows:

A traditional top-fermenting yeast that has a good balance between fruity esters and warming spice phenolics. The yeast will leave some sweetness and will drop bright if left long enough.Suitable for Witbier, Grand Cru, Spiced Ales and other specialty beers.Attenuation: HighFlocculation: LowUsage Directions: Sprinkle directly on up to 23 L (6 US Gal) of wort. For best results, ferment at 18-25 degrees C (64-77 degrees F).
I had thought of usingthe new M47Belgian Abbaye Yeast from the same guys, but decided, that as no one had a ctually tried it locally. I'd give it a shot. Ther were nearly no reviews on this yeas through the net, so I have no idea really what to expect. Although the descriptors suggest it'd go quite well with some moderate hopping.

So lets give the masses what they want----- A Review on this new strain of Dry Yeast. All Be it not really true to style for what alot of people expect. Butthats just not how I Roll. 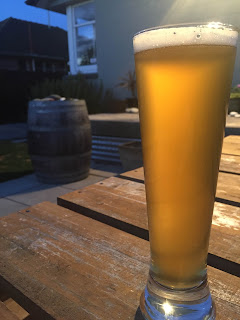 20April 2016 - Raise temp to 21 Deg C to finish fermentation.
Decided against dryhopping with the remaing Nelson Sauvin, to get a better idea of what the yeast will contribute. (Plus I've been busy all week organising the CHBA Club Launch)

Fermentation: Took off pretty quickly, I had signs of positive pressure in 12hours, and a solid krausen at 24 hours. Due to the lower gravity, the fermentation seemed to finish around the time I raised my temp to 21 (Krausen was mostly gone). The FG was a little high, so either it doesn't attenuate as much as I thought, or the yeast simply got a bit lazy.
I think the latter is probably slightly more true, with specialty malts as well (Not overly common in this style of beer) may have contributed a touch, but definitely not where it sits.
Just FYI - Treat this yeast with care, to makes sure it attenuates fully, so run your Temp increase a day earlier than you plan to.

Aroma: Banana and clove, with plenty of belgian spice. some Wheaty sweetness. Very much Belgian Wit. with a touch of hefeweizen

Flavour: Little to no hop character, bitterness is spot on. Typical Wheat/Wit type flavour, wheat cracker flavour/sweetness, and plenty of banana & Clove / spices.
Yeast is definiely at thefront of the flavour, very drinkable.

Overall: I quite like the yeast in general, and probably deserves more time to play around. Definitely what I would call a wit yeast, some definite clove/banana notes, but not as in your face as something like a full on wheat beer yeast.
For me this didn't attenuate where I was hoping it would, but I'll put that down to me, ratherthan anything else.
Alot of my beers recently, have attenuated fast and aggressively, they've then dropped out either pre-maturely (insert dirty joke here) or missed the D-Rest time.

Next time I make this beer, I will dryhop and dry the beer out slightly more by removing the Gladiator/carapils, and the Melanoidin, and turn it into much more of a Wit type recipe, but with plenty of hops.

All in all, I'd recommend this yeast, and I will definitely play around further with it.