As promised, some brief tasting notes for the American IPA. Apologies for the crappy picture. I don't have a good camera currently, so it's just an iPhone.....
this recipe was based off the Blind Pig Clone from here, so the recipe is pretty much Identical.
WAR PIGS American IPA 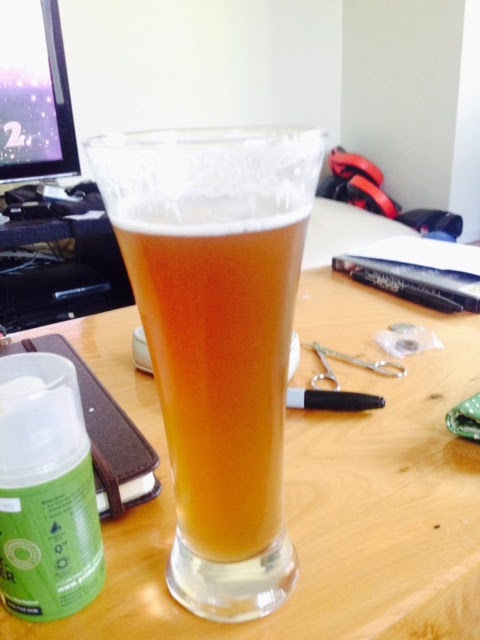 Appearance: Hazy Golden colour, the haze makes it muddy looking. Yeast Haze and some chill haze.
Aroma: Nice enough, some grapefruit, pine and grassyness. I suspect I left the slightly aged hops in too long, and there's a touch of butter in the mix also. Not so good.
Flavour: Hops lead the way, some grassyness and a slightly malty backbone, but again the diacetyl takes away from what should have been. The hops I suspect were not stored all that well, or vacuum packed, so maybe some cheesy-ness. the haze has given the beer a slightly bitter bite, this is the yeast not dropping out, which is typical of Conan/Vermont yeasts.
Mouthfeel: This is where the diacetyl takes its place, silky and butter on the mouth, body is fine, carb is probably a bit low, but its how I like them.
Overall: Not bad, but not good either, and I've gone off it as time's gone on. swap out the yeast, and get it cleaner. It finished at 1.014 which was weird, but I'm testing out WLP090 as a house yeast for these types of beers, so we'll see.

This was my friend Oli's 100th batch. He decided to brew a style he really enjoyed, and let's be honest here who doesn't enjoy them. An Imperial Stout. Originally Based on the CYBI iStout recipe, from our group brew a good year and a bit ago. Chris was kind enough to lend his mashtun for the day, which is a very large 175 litres, he has brwewed one commercial batch from it, and it works a treat. Stainless steel, with cast legs. He also has a boil kettle which is a converted Hot watercylinder, about 200 litres or so. Pretty impressive stuff.

I'll post the recipe below to help people out if they decide to go ahead with it. I took away 10 litres on the WLP090 yeast I'm testing, Oli took 20 litres for himself, as did Chris, and Finney took another 10. So all in all, around 60 litres was the finished volume. an FG of 1.102 was hit, and a 2 hour boil.
The recipe is HERE.
I also had an empty keg to fill, and a test batch to make for my wedding coming up, so for me at Oli's it was all about This. Essentially an American Amber, which would make for a nice sessionable beer, for my wedding if it comes out ok. I've aptly named this beer Bathed in Blood II, but only to fill the name, which should work.

This was a great day, and the smells were quite heavenly from the RIS, big roast and chocolate. I'm not sure what I plan to do with my section of the RIS,  I doubt I'll oak any of itI have some  inspiration for Dryhopping, which actually comes from Goose Island Beer Co., who made an RIS called Night Stalker, which was heavily dry-hopped with Simcoe. Now as you know, I didn't like the Simcoe in the Black IPA, and given I've heard Centennial works well in darker beers, may give this a shot. But I'll decide closer to the time.

In the pipeline before the end of Summer, I'll hopefully have another sour in the mix, and maybe another brett beer (Possibly mixed culture of Saison yeast and Brettanomyces.)