Part of the reason I've been so quiet recently is this......
(Insert Gross picture of knee scar here)

I had knee surgery to reconstruct the Anterior Cruciate Ligament in my left knee, leaving me crippled for a solid 2-3 months. So we know what that means don't we? No Brewing of any form of beer, and even no drinking for awhile.

so, well before this overly invasive knee surgery I bought some of the following:
* The Yeast Bay - Saison Brett Blend
* WLP648 - Brettanomyces Vrai

The intention being to recreated a similar culture to the WLP670 - American farmhouse yeast, that I've enjoyed previously (last batch went all banana like) so after that poor effort,  I decided to try and create some for of house blend, which may or may not change over the course of. time. I'm not entirely sure how I'l feed and keep the culture going etc. but I'm excited to find out.

Anyway, I brewed this particular beer in January of all times, with a simple 3 week primary fermentation. Followed by racking onto 3kg of Mangoes (In hindsight probably a tad too much) and aged on those until April. The harvest for this blend then went straight into a similar style beer, but with peaches and a kettle sour (Lacto Plantarum). Given my knee and everything else that was going on, this got a 6-8 week primary, before the flesh of white peaches were added (Note to Self: Cut the peaches before freezing them, and remove the stones, otherwise it gets pretty messy)

I then dry hopped this beer with Mosaic and Citra for a few days, before adding gelatin and kegging. the second beer receives Simcoe/Amarillo after the fruit explosion is done (I overfilled a little bit I think.....)

Overall, the blend has worked out really nicely, and I'm excited to make more beer with it. 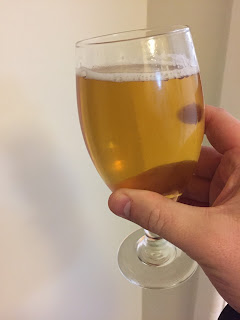 2 separate Starters were made - 1: WLP648 1/2 Litre Starter 2: 1 Litre Starter Saison Brett Blend and WLP648 blended into Starter 2. (the idea was to grow up the 648 a little more, to get some extra brettanomyces in there.)
Brewing Notes:

February 2017: Racked to secondary onto 3kg of Supermarket Frozen Mango

April 2017: Racked to Tertiary (Purged with Co2) with dry hops as above.

Appearance: Pale straw/golden colour Carbonation is mid range (all my beers tend to sit around the same level) head retention is pretty non existent, given the mangoes used. looks good. crystal clear from the gelatin addition.

Aroma: Early on the Mango well and truly dominated. Very green fruit over ripe mango and some hoppy notes to suit. Now its a little older the fruit has fallen away, and the hops are much more prominent. minimal malt character. Some notes from the Brett and farmhouse yeast. Impressive. the starter has done something here I think.

Flavour: Mangoes again, dominating the beer as per the aroma, the hops are now coming forward and its a nice easy drinker. Prickly carbonation, but not too fizzy.

Mouth feel:  Surprisingly good. I thought the fruit and lack of speciality malts might kill the mouth feel. Like I said the head retention is non existent, but that's by-the-by. It's come out really well, easy drinking but not thin, the brettanomyces in this beer has really helped to boost the mouth feel, as well as the flaked oats to prevent it from being watery.

Overall: Really enjoyable, reduce the mango addition. Its just wayyyyy too over the top when its fresh. The Brett is subtle, which is nice, and the farmhouse elements are all there. If I can hit my Target OG's I think its a winner. reduce the fruit, balance it out a bit more with the dry hops, but I'm glad I didn't waste any money on whirlpool/flame out hops.

This house yeast has already been racked off about 3-4 weeks ago (I need to get it running ASAP) from adding my white flesh peaches to the lacto soured version of the same beer. This is Simcoe/Amarillo, the peaches are probably way too much as well, but hey - live and learn right???? I'm hoping to get this kegged up in a few weeks, after dry hopping and gelatin.
Posted by CRUSADER1612 at 18:23