Welcome to Wellington!
We went to Wellington for the weekend, to see some friends and made a point of doing the whole Craft Beer Thing.
First up was lunch at The Malthouse, for the "Darkest Day". Had an EpIC Repocalypse. a Black IPA Collaboration with Fork and Brewer at 8.5%. All I can say is wow, Super Hop Flavour, with the patented Epic Late Hop additions. Pours Inkly black with REd hue.

Now onto the main Event, we spent the afternoon, at The garage Project, a brewery, who like to make very unique beers, they really push the boundaries of style.

The beers we tasted were:
California Uber Alles: Based off the Anchor Steam Beer with a Garage project difference, more hops etc.
Lil' Red Rye:  A Hoppy Red Ale, with Spicy Rye Malt 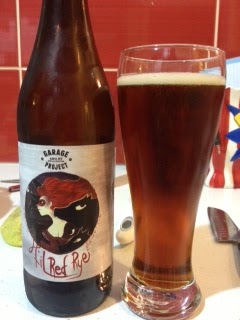 Sunday after some standard wellington Sight seeing, we took a trip to Goldings Free dive, for the Garage Project Tap take over, for one reason to drink this: 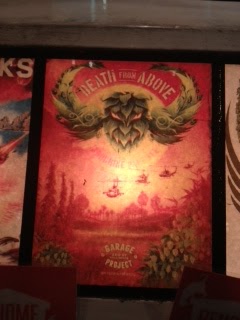 Heres my full review:
AROMA: American Citrus Hops. big bold and hoppy, with hints of Grapefruit etc. I get small hints of Mint and Chilli, but its very small.
APPEARANCE: Orange/Amber Colouyr with small lacing off white Head, Cealr to Brilliant, With some minor hop Haze
FLAVOUR: Major hops, Hint of Malt Background Complexity. Followed by a minty freshness, and Heated chilli. that reimains, a the bakc of the throat is some minty freshness and heat from the chillies.
OVERALL: WOW! What an amazing Beer, hoppy Spicy Minty, just wow, They only servied in Half Pints, because there was such a small amount.
if they ever make this again, I'll be buying in bulk..... lol.
Posted by CRUSADER1612 at 01:23