There's been a fair bit of chatter about this so called "Style".

Some hate the haze, and consider it to be poor brewing style, others love it, saying its like a lovely Orange Juice beer.
soft bitterness, with juicy hop flavours.

Me? I have no idea what t o think - so I decided to brew one.
I mean why the hell not right?
I don't necessarily have an averse to hazy beers, depending on the style of course. Which is why I gelatin most of my Hoppy Beers. they just end up looking so pretty in a nice glass, while that aroma jumps out at you.

for me. the biggest issue, I've seen is too many people actually trying to make their beers hazy.(here in NZ, its not an overly popular way of doing things as yet) Removing Koppafloc / whirlfloc, and some even adding wheat flour or other adjunct to make the haze more Prominent. (WTF?!)
Now, I have no idea what causes the haze. everyone seems to have a different opinion, the only thing I will say is this
[hazy beers can be good, provided you pick the right style, yeast, and stick to all of your normal processes, changing thing, to try to actually replicate what a beer acutally looks like, is ridiculous, if you know your process - stick to it. It could be your un-doing in the long run]


So, to try to get a handle on this particular style, I decided to brew a tried and true recipe {Thanks to Ed Coffey - alesoftheriverwards.com

The reason is 3 fold:
1- I've been having issues with Diacetyl, on US-05 (this is common on this particular dry yeast). so I figured, I should try something different, and to be fair, actually use a liquid yeast instead of being a cheap ass.
2- I wondered what so many oats would do to the mouth fel of a beer - particularly a smaller pale ale style beer like this one.
3- Like I said I'm not bothered with haze, but if my processes are good, and correct, then the beer should clear out ok, once I add my gelatin finings into the keg (don't get me wrong, I'm not expecting crystal clear commercial grade clarity). 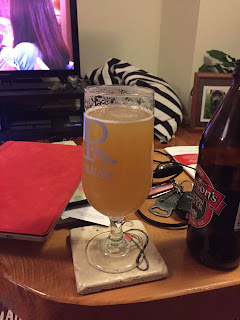 Tasting - 17 August 2016:
Appearance - Hazy Golden Colour (I suspect if it ever clears up it will be a bright golden colour) Nice Lacing and tight bubbles

Aroma - Aromas's of Grapefruit and Hops - Similar in some ways to what you'd expect Grapefruit Juice to smell like. It jumps out of the glass at you.

Flavour - Similar to aroma - with a "Zing" to it, low bitterness, high saturated hop flavour, low malt flavour. The hops really shine here, and funnily enough I don't get a big Nelson Sauvin flavour from it.

Mouthfeel - maybe a touch thin considering the amoun of Flaked Oats. - but I think it suits the style.

Overall - Fantastic beer, and there is merit to the style. the haze does bother me a bit, but it doesn't affect the overall view of this beer. Some haze is fine, but when these beers start to look muddy, it becomes a problem for me. Its definitely worht a re-brew, and possibly turning it more into a session IPa would work nicely. Adding some carapils and mashing another degree higher would probably get this on the money here.

GARAGE PROJECT, PARTY&BULLSHIT - I had the opportunity to try one of the first NZ Takes on the NE IPA Style recently.
It misses the mark in what this should be - haze is fine, but htis goes more towards muddy, and the hops flavour isn't saturated anywhere near enough. it's too much like an ugly American IPA. The bitterness is lower, but is doesn't have the juicy zingy flavour and aroma.