Leffe Radieuse With M47 and Brettanomyces.

Beers influenced with Brettanomyces, whether that is a mixed culture for a saison, or aged in secondary. To explore the different flavours etc. of such a versatile organism.

So, on that note, I have brewed wha is essentially a clone of one of my favourite belgian beers. Leffe Radieuse. Its spicy, phenolic, with lovely notes of  caramel, dates and raisins.

The beer has then been aged with Brettanomyces Bruxellensis. (WLP650) for XX months.
SO, Here Goes...... 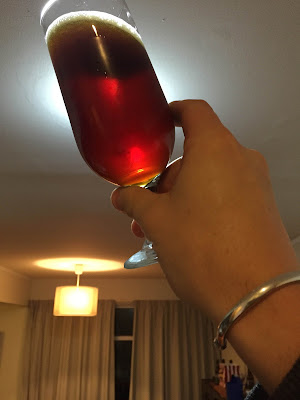 26 June 2016 - Bottled 5 Litres into 330ml bottles - 1 carb drop per bottle.
Plain Version FG: 1.015
Appearance: Blood red, when held to the light. nice and clear, after some extended ageing in a secondary carboy. Off white head, which lingers nicely in the glass.

Flavour: Sweet malt, and Belgian candy come to the fore, with a beautiful back up of Belgian phenols and spices. again similar to Radieuse. At a young age, this should age well, as a touch of booze is present, but similar to the original. Bitterness could be higher.

Mouthfeel: thick and creamy, good sweetness, not too over powering.

Overall: Fantastic Beer - Next time the bitterness will be increased slightly (Not by too much), but as a clone recipe, this is really quite close. Especially when you take into account the Dry Yeast factor.

Definite re-brew on the card, but split in half next time (I need more of this)