Marching on Together Bitter 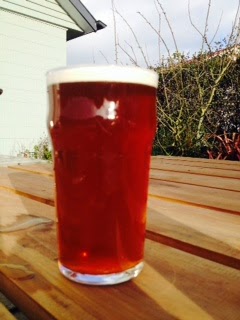 Tasting Notes;
Abv 3.8%.  NZ Styrian Goldings, and Riwaka.
Marching on Together Yorkshie Bitter
Appearance: Pours a golden Amber colour, pretty clear. although it took some time to drop clear in the keg. Nice fluffy white head.
Aroma: Slight Yeast Esters and Some Riwaka, along with some back up from a little malt. so far so good.
Flavour: Light Tasting, easy drinkers, Plenty of Yeast flavour and nice riwaka Backup. This wasn't dry-hopped. Plenty of hop flavour to keep thing interesting. Light malt, but given the low abv its to be expected.
Mouthfeel. Light/Medium, could do with a little more to it. but hey for a 3.8% beer I can have a few of these.
Overall: good beer, very tasty, I'm halfway through the keg already. Easy to drink. ext time, I'd like to make it darker, almost amber colour. Otherthan that I wouldn't change alot.

as Promised, here is the recipe for the Oud Bruin we all brewed up.
Hail Caesar Oud Bruin
Next up: tastingnotes for my brett IPA.