Finally, we emptied the barrel during the week. I've got a picture or two to post up below, which I'll do, so we took a hand-pull or two from it. Initial tastes are surprising. Better than I expected, mainly because a 6% beer in an oak barrel, open to oxidation etc. might've been a tad optimistic in my eyes.
We probably should've done a Strong Scotch Ale or something like that... but I digress.

Onto the transfer, I got 30 litres of Red Beer into kegs, along with a transfer of the Oud Bruin into the Barrel, which didn't take as long as I thought it would. this will sit there for a good 12-18 months on the bugs we pitched. then kegged as per the red one. But that'll be sometime away.
I'll post the Oud Bruin recipe in my next post, which will finally be tasting note and recipes for both my bitter and my Brett IPA.

Coming out of the fermenter, is the Brown ale, and in goes a Brett Saison, which will sit for awhile (two reasons, Conditioning time, and Laziness) Plus I'll have plenty of beer to drink.
After that Robust Port for NHC, and I seem to be changing tact on the other 1-2 beers for NHC. I'm now thinking an Imperial Black IPA, essentially an imperial version of the Dark storm produced awhile back. I know its a nice beer, so if I can get it right.

Something else I'll be doing on each post is a small snippet of what beers are:
Upcoming, Primary Fermentation, Secondary Fermentation. Bottled Beers, Kegged beers, and so on. It'll give you guys and idea what sort of tasting notes to expect in the coming period, so here goes.

So upcoming notes as you'll see from above is the Brett IPA, the US05 IPA, the Yorkshire Bitter, the Red Barron Red Ale, and of course (a wee way down the line) the Black Sheep Yorkshire Brown. Plenty on the cards.
So without Further a due, here is a picture of the refill of  the barrel. 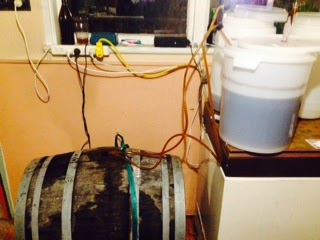