As I drink Douglas's Belgian amber, The last Beer in our CHCH Case swap. This morning I took the time i had and made a partial mash with NZ Hops, Pacific Gem, Motueka and Cascade NZ. I beat efficiency, I find that using the brewshop.co.nz Light DME helps with this. Heres a Picture of the colour I got at Transfer... 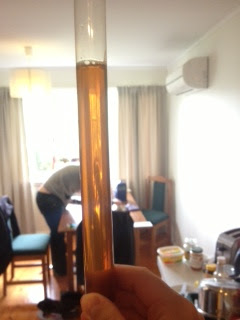 Pretty good colour, I added 1 teaspoon of Calcium Sulphate to help bring out some of that hop flavour. I used Pacific Gem for bittering,which may be a bit old? I opened the freezer and found that the Pacific Gem was open, so I took 25grams at 60 mins. along with 30g of NZ Cascade and Motueka at 10 minutes and 0 mins. I got hold of WLP090 to try and fix my Porter, but if you look at my previous post i didn't get to use it..
I made a starter for the brew on thursday night, gives plenty of time for the yeast to grow.
Now onto my experiments:
Number One:
Cold steeping - Because I had my infection, I needed to get a dark/black beer for the local CHCH Brew Competition in may. So I thought I'd give this a go. 50grams of Carafa II in 250mls of Room temperature Water. this was put in on Friday morning, mashed for 24hours approximately, then sparged with 200-250ml of 76 degree water, through a sieve. This came out a really inky Black colour, so i split off 4 litres of the finished wort, into a small Demi-John, nice and dark. when I checked the OG there was no difference though, I can't say I'm disappointed, I was just looking for that dark Colour for a Black IPA. It certainly has worked. so far so Good. Heres a Picture. 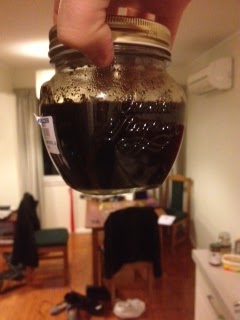 Experiment Two:
Hot Steeping Hops in 80 Degree Water, for a certain period of time.
I've read a bit about a couple of breweries who use a piece of brewing equipment called a hop percolator, so i thought I'd try  a bastardised version of it, to see if I could gain  any additional Aroma/flavour/bitterness out of the flameout hops. The process I used is to Heat 1 litre on water to boiling point for sanitation, then I let it move down to 80 degrees C and added 25g of Motueka and 25g CascadeNZ, and ad these to the hot water and let it sit for the brewing period, in this case, I probably pre-empted the situation and transferred off the  hops using a sieve and hop bag. i then added the water to the cooled wort in tbhe fermenter, time will tell if this was worth it.
I'm hoping it'll work. and it certainly saves wort/ trub losses. 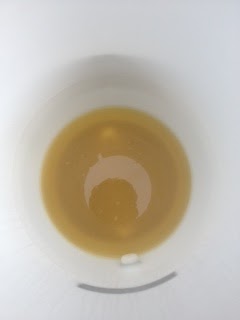